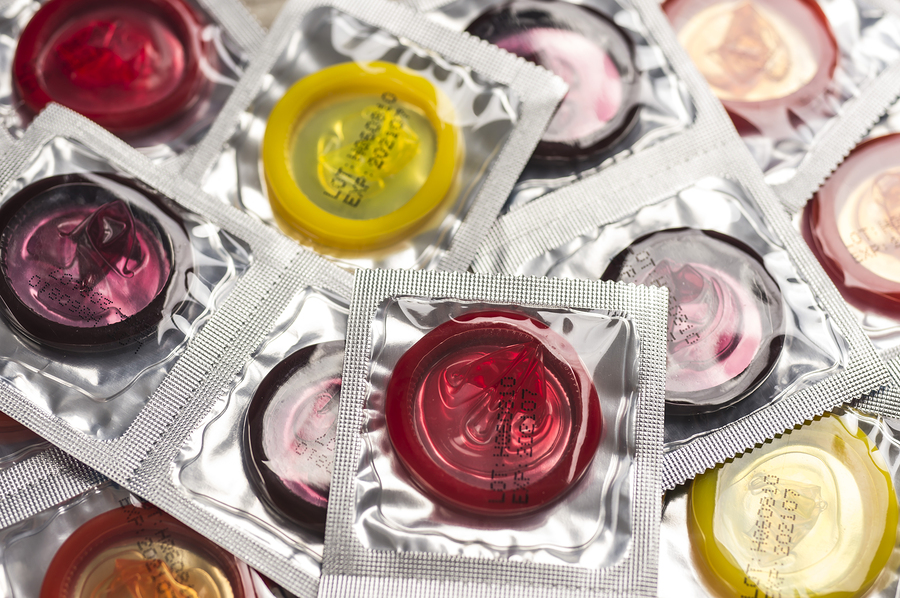 Safe, easy-to-use, affordable and effective — these are just four reasons why condoms are a go-to for millions of Americans when it comes to preventing pregnancy and the spread of sexually transmitted diseases (STDs).

Whether you prefer condoms over hormonal birth control methods, or you simply like the convenience condoms offer, it’s important to use them correctly. Here’s what you need to know about types of condoms, how to use them and where to receive free condoms.

Condoms are almost as old as the human race. For as long as we’ve roamed the earth, it seems we’ve been interested in enjoying sex without… ah, consequences. Researchers believe cave paintings dating from roughly 11,000 B.C. depict the first known images of condoms. By Roman times, people were using goat bladders to prevent pregnancy. Other civilizations fashioned condoms from silk, lamb intestines and tortoiseshell.

Fortunately, today’s options are turtle-free (although you can still purchase condoms made from lambskin). Walk through any drugstore and you’ll see a wall of condom options that can be downright intimidating. However, condoms really boil down to three main types:

Latex is a type of rubber, which is — no surprise — the origin of the slang “rubber” for a condom.

The most popular type of condom, latex is also the most effective at preventing pregnancy and STDs, as the pores that make up the rubber are too tiny for STDs to pass through.

If you’re among the 1% of people who have a latex allergy, you probably don’t want latex anywhere near your delicate areas. Fortunately, non-latex condoms are a safe and effective alternative to latex.

They’re also compatible with oil-based, silicone-based and water-based lubricants. Non-latex condoms are made from polyurethane, which is a type of plastic. Since polyurethane conducts heat better than latex, some people say it feels better to wear a non-latex condom.

If you’re wondering how long do non-latex condoms last, note: polyurethane can stretch out more easily than latex, so it won’t fit as snugly as a latex condom and can loosen during sex, increasing the risk of pregnancy or STD transmission.

(Read this post to learn how to find the right-sized condom!)

As the name indicates, lambskin condoms are made from natural animal skin and intestines.

Because lambskin is a natural material, some people say it delivers heightened sensations during sex. However, lambskin is more porous than latex or polyurethane, which means it’s not as effective at preventing the transmission of STDs.

While the big three above are considered to be the only “types” of condoms, there’s been a lot of interest in condom innovation lately, and that means more types are hitting the market.

One new type is curtesy of sex toy manufacturer LELO — hex-based condoms. These condoms are built with a hexagonal structure, which makes them feel different (and makes them thinner). As a downside, they are considerably more expensive. While right now they’re more of a novelty than anything else, you might be interested in trying them.

Another interesting new condom is the Unique Pull. They are made out of polyethylene, and unlike regular condoms which come in individual wrappers, these are stored in a credit-card sized case that holds three condoms. When you want to use one, you pull it out and use a disposable applicator to apply one to your penis. That way, you’re never going to put one on the wrong way! They’re also odorless, transparent, and thin. While certainly different from your usual condoms, they might be a nice change of pace for you.

How Effective Are Condoms at Preventing Pregnancy and STDs? 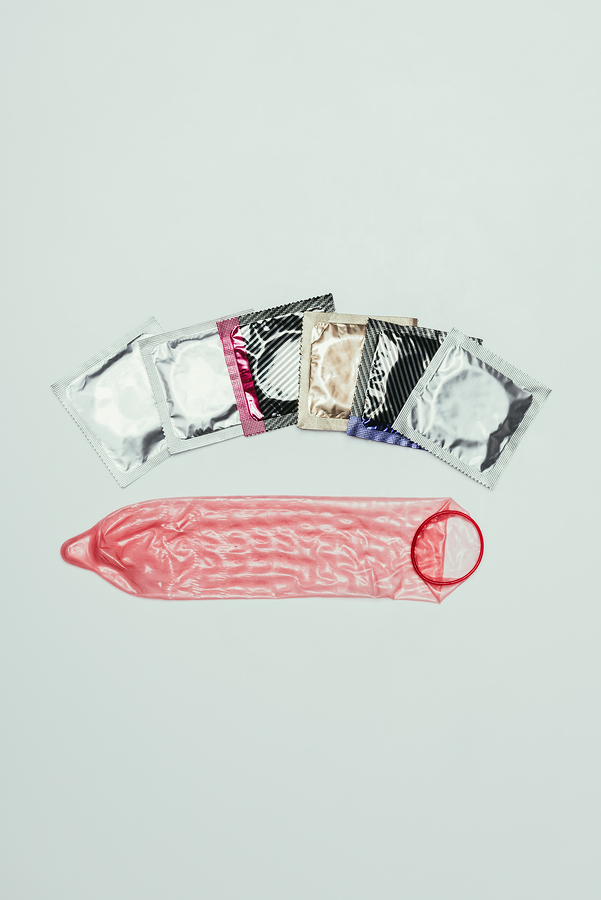 However, condoms are only effective when they’re used properly. According to the Centers for Disease Control and Prevention (CDC), there are several dos and don’ts for condoms.

Nothing lasts forever, including your condoms. If you’ve had a just-in-case tucked in your wallet for a while, don’t assume it’s good to go. Always check the expiration date before you suit up.

Speaking of your wallet, it’s not an ideal place to store condoms — at least not long-term. The reason is that condoms break down when exposed to heat and friction.

As you move around and sit, the condom heats up and cools down, which wears it out fast. (Condoms will also break down when exposed to extreme cold.) For long-term storage, it’s best to keep condoms in a cool, dry place like a bedside table or a sock drawer.

3. Check for Tears and Defects

A condom is only effective if it’s a true barrier. Any holes or tears will render it ineffective, so check it over thoroughly as you roll it on. You should also give the package a once over to make sure there are no rips, tears or holes.

4. Use Lubricants to Prevent Condom Breakage

Personal lubricants can help prevent breakage, especially during vigorous sex. As a bonus, lube can make everything feel better for both partners.

Important Note: Make sure that before you use a lubricant with a condom that you carefully read the packaging to make sure that the lubricant is safe to use with condoms.

Reducing your carbon footprint is an admirable goal, but reusing condoms is never an option.

2. Don’t Use More Than One Condom at a Time

Doubling up on condoms doesn’t give you more protection. If you’re concerned about pregnancy or STDs, use a backup method of birth control in addition to the condom.

3. Don’t Use An Expired Condom

How long are condoms good for? Although some condom makers list five years from the date of manufacture, you should never use a condom past its printed expiration date. An expired condom can contain tiny tears, and it may be dried out and thus more prone to breakage. 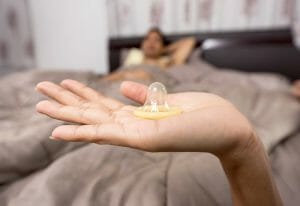 From putting them on incorrectly to using them without checking for damage, there are a lot of ways to use a condom the wrong way. In an analysis of 50 studies on condom use, researchers at The Kinsey Institute for Research in Sex, Gender and Reproduction found some startling data about condom misuse. Here are 10 common condom mistakes the research revealed.

1. Failing to Check Condoms for Damage

An astonishing 82.7 percent of women and 74.5 percent of men fail to inspect a condom before using it. Researchers say you should inspect both the wrapper and the condom itself before use.

2. Using Condoms Past the Expiration Date

Simply put, if a condom is expired, it’s not safe to use. Also, don’t mistake the date of manufacture for the expiration date.

3. Not Talking about Condoms Before Sex

Communication is key to all aspects of sex and healthy relationships. Furthermore, no one enjoys a hasty, last-second discussion about contraception in the heat of the moment. If you wait to talk about contraception, you might make an unwise decision you regret later on. Make sure you take time to talk about safe sex in a responsible way before things heat up with your significant other.

Condom wrappers can be tough to open — especially when you’re in a bit of a hurry. No matter how tempting, never use scissors or any other sharp object to tear open the package, as this risks tearing or poking a hole in the condom. And, no, you should never use your teeth, either.

5. Failure to Roll On

Condoms should be positioned at the tip of an erect penis and then rolled on, not completely unrolled and slipped on like a sock.

6. Not Rolling the Condom On All the Way

On the other hand, it’s also important to unroll the condom all the way up the penis. Otherwise, it can slip off during sex.

7. Failing to Leave Room at the Condom Tip

Once a condom is rolled on, it’s important to pinch the tip of the condom. This removes the air and leaves space for sperm. Various studies show that between 24.3 percent and 45.7 percent of people fail to leave a reservoir for sperm, which increases the risk of breakage.

8. Putting the Condom on Too Late

When it comes to condoms, you can’t procrastinate. Just because you don’t ejaculate inside your partner doesn’t mean you haven’t released sperm during sexual play. Penetration without a condom also exposes you to STDs.

What goes on must come off. According to the CDC, the correct way to remove a condom is to wait until after sex but before withdrawal. Before pulling out, hold the condom at its base and withdraw the penis while holding the condom in place, sort of like taking your hand out of a glove — then toss it.

10. Putting the Condom On Inside Out (Or Reusing It)

You should never reuse a condom, and that includes flipping it inside out and using the other side. Even the most careful rinsing can still expose your partner to body fluids, which increases the risk of pregnancy and STDs.

Yes, condoms are a powerful and accessible form of birth control, but they can also be used to protect you in other sexual capacities. If your go-to form of birth control is the condom, be sure you’re making the most of your supply by checking out these different applications for them.

Although oral sex is extremely unlikely to cause pregnancy (unless you’re combining it with another sexual act), it cannot protect you from sexually transmitted diseases. If you plan to engage in oral sex with a new partner or someone whose sexual history you are unsure of, a condom is essential for keeping you healthy and safe.

Contrary to popular belief, pairing a condom with oral sex doesn’t have to end in disappointment. There are several steps you can take to maximize your oral sex experience even with a condom, including:

Apply a condom with your mouth!

This doesn’t take as much finesse as you might think and can make the condom application process less awkward and clunky and more hot and heavy. Of course, you should practice first before trying this on a partner.

Use a flavored lubricant

Pair non-lubricated condoms with a flavored lubricant that’s condom compatible, such as ASTROGLIDE Strawberry for a candy-sweet oral experience.

All you have to do is cut the condom in half, creating a large sheet you can place over the vulva.

That’s where your trusty condom comes in. If you just can’t part with the long-lasting, hypoallergenic properties of silicone lube, you can protect your favorite sex toys with a condom.

Protect yourself from unsavory intruders

In recent years, there has been increasing concern about phthalates in sex toys. Using a condom with your toys can protect your body from any materials that could compromise your health.
Even if the sex toys in your pleasure chest are phthalate-free, there’s a chance bacteria is building within them. Porous toys, even with regular, thorough cleaning, can develop excess moisture and bacteria that you don’t want in contact with your body.

Where to Get Free Condoms 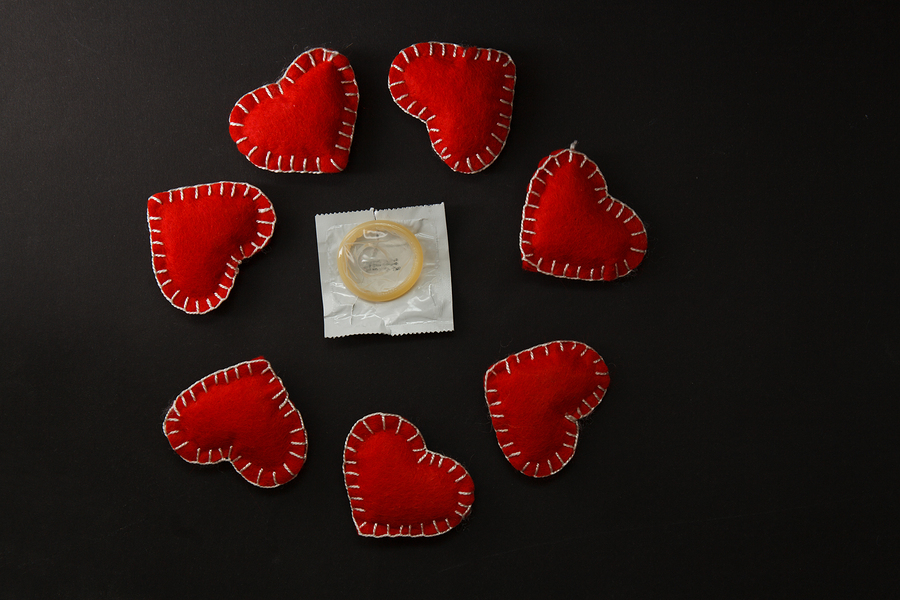 One of the reasons condoms are so popular is their affordability.

And unlike the contraceptive pill or an IUD, you don’t need a prescription to buy condoms. Condoms are also widely available in drugstores, retail stores, and big box stores. Although prices vary depending on the type of condom, the average price is about $1 per condom.

Of course, the only thing better than affordable is free.

You can get free condoms from a variety of places, including health clinics, campus health centers, and some Planned Parenthood locations.

If you live in California and you’re between the ages of 12 and 19, you can also sign up to receive 10 free condoms from the Condom Access Project.

If you’re not in Cali, the Condom Finder website lets you type in your address and find organizations that distribute free condoms near you. While you’re at it, don’t forget to request your free lube sample from ASTROGLIDE.

What are your favorite types of condoms?