The Complete Guide to Gender Identity 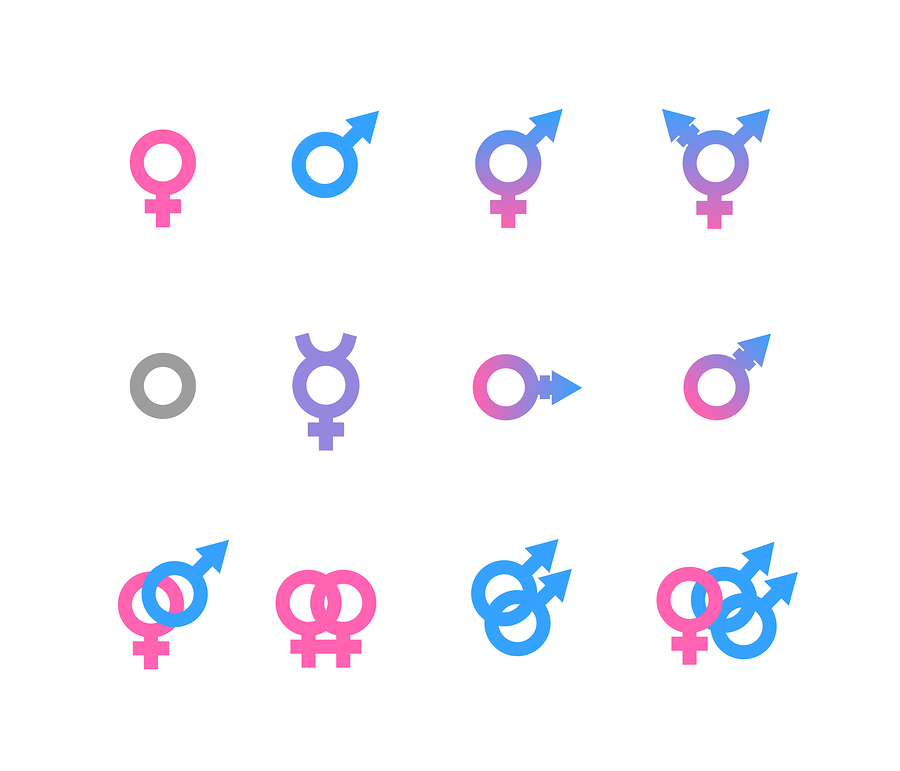 While most people think of gender as synonymous with anatomical sexual organs, gender is actually different from sex. If you’ve ever heard someone talk about so-called “gender roles” in society, you likely already have an idea of the difference.

Simply put, a person’s sex refers to the sexual organs they were born with, along with the chromosomes and hormones that define an individual as male or female.

Gender, on the other hand, describes the cultural norms or characteristics that denote male versus female — and sometimes something in between. In the West, we’re used to somewhat strict gender roles that lump males and females into narrowly drawn social constructs of what constitutes appropriate activities and aspirations for men and women. However, many other societies have much more fluid ideas about gender.

Different Types of Gender Around the World

People who live in the United States and the Commonwealth countries that make up the former British Empire typically think of gender as a “one versus the other” sort of thing. However, other countries around the world regard gender as something varied and far less rigidly defined.

For example, the Buginese people of Sulawesi — a small island in Indonesia — recognize a grand total of five genders. The first two are the typical male and female, which follow along with what westerners perceive as “normal.” However, another gender known as calalai refers to an anatomical female who treads somewhere between male and female. Likewise, the Buginese gender calabai describes an anatomical male who prefers to behave as a woman typically does. The Buginese also have a fifth metagender, the bissu, who are thought of as a combination of all genders and traditionally serve their communities as priests.

But out-of-the-box genders aren’t limited to Southeast Asia. Many Americans are surprised to learn that most Native American tribes recognized a third gender. Known as berdaches, this gender included both anatomical males and females. Male berdaches typically did work normally restricted to women, whereas female berdaches preferred the standard male warrior tasks like hunting and fighting. It was also common for berdaches to function in spiritual roles, such as shaman and healer.

The Buginese and berdaches demonstrate that, rather than operating as a sort of light switch that’s either up or down, gender is really more of a spectrum. For example, gender theorists note that the calalai and calabai genders in Sulawesi don’t necessarily desire to be a different sex. While they might wear certain clothing associated with one gender or the other, they occupy a sort of gray area in between western ideas of male and female.

What Is Gender Expression?

What does masculinity mean to you? What about femininity? As the Gill Foundation puts it, “[Gender expression] is usually an extension of our ‘gender identity,’ our innate sense of being male or female.”

Likewise, the majority of male transvestites — men who choose to wear women’s clothing — identify as heterosexual. Their gender identity is male, and they are sexually attracted to the opposite gender, but they choose to express gender in a traditionally female way.

Still, other people choose to express gender in an androgynous way, meaning they combine both male and female forms of gender expression. Perhaps the most famous person to do this was David Bowie, who celebrated both male and female physical characteristics and clothing. Actor Diane Keaton also famously adopted male clothing and mannerisms in the movie “Annie Hall” — a style she would carry on throughout her life.

The bottom line is that gender expression is personal. Because it means different things to different people, it’s difficult to define — and that’s probably just as it should be.

If you feel a little confused about the terms and definitions that swirl around the subject of gender identity, you’re not alone. The main thing to remember is that gender is different from both anatomical sex and sexual orientation. According to Gender Spectrum, a resource for gender inclusivity, gender refers to how we see ourselves, whereas sexual orientation refers to who we’re physically, emotionally or romantically attracted to.

According to the Human Rights Campaign, sexual orientation is “an inherent or immutable enduring emotional, romantic or sexual attraction to other people.” Several studies have confirmed that sexual orientation is something that forms in the womb on a cellular level. And while a person can certainly choose whether to engage in sexual contact with one person or another, sexual attraction is something you’re born with.

Kelly Servick at Science points out that molecular biologists who studied identical twin brothers in 2014 detected “direct evidence of a ‘gay gene,’ by identifying a stretch on the X chromosome likely associated with homosexuality.” Additionally, other studies have found an even broader familial link when it comes to sexual orientation. Michael Sean Pepper and Beverley Kramer, academics and writers at The Conversation, write that research shows that “homosexual men are also more likely to have brothers that are also homosexual. Similarly, family studies show that lesbian women have more lesbian sisters than heterosexual women.”

Of course, heterosexuality and homosexuality aren’t the only games in town. The Kinsey Scale, which has been around since 1948, famously organized sexual orientation into a gradient numbering between 0 and 6, with 0 being “exclusively heterosexual” and 6 being “exclusively homosexual.” And you don’t have to be a math genius to know there is a whole lot of variation in between.

The University of California, Santa Barbara also offers a thorough guide to the various sexual orientations. On a very basic level, most people are either monosexual, which means they are solely attracted to one gender, or plurisexual, which means they feel attraction to multiple genders. Within monosexuality and plurisexuality, you’ll also find a wide range of sexual orientations and preferences.

For some people, their gender identity doesn’t line up with their sex. This is wholly different from sexual orientation, which relates only to sexual attraction. People who feel a disconnect between their gender identity and their anatomical sex are most often referred to as transgender individuals.

As GLAAD explains, “Trying to change a person’s gender identity is no more successful than trying to change a person’s sexual orientation — it doesn’t work. So most transgender people seek to bring their bodies into alignment with their gender identity. This is called transition.” However, you can also be a transgender person without transitioning. The decision to transition is deeply personal, and some people choose not to change their sex. It’s also important to note that, just like cisgender individuals, transgender people can be any sexual orientation, including straight, lesbian, gay, bisexual or queer.

There is also a separate group of people known as Intersex. In past years, the term “hermaphrodite” was often used to describe Intersex people, but this term is now outdated. Intersex individuals are born with anatomical sex organs that are ambiguous. As Dr. Paul Joannides at Psychology Today explains, “One of the challenges in explaining Intersex is that we often confuse it with transgender. Yet very few people who are transgender are Intersex. In many ways, the conditions aren’t even related. Intersex tends to be about the reproductive organs that aren’t clearly male or female, while transgender is about a person’s experience of being male or female.”

It’s normal — and totally okay! — to have questions about transgender and Intersex people. The important thing is to treat everyone with respect and to learn which questions are appropriate (and inappropriate) to ask. Here’s a quick list of 10 questions to avoid.

However you define gender identity and sexual orientation, most people can agree that sex is something to be celebrated and enjoyed. Let us know how you define sex positivity by tweeting us @ASTROGLIDE. Also, don’t forget to score your free sample.